Morocco is one of those countries that surprises you, not only because of its culture and traditions, but also for its beautiful and varied landscapes. It does not only consist of dry soil and stones, there are many more wonders to discover.
The trip, in which 36 students went on a unique and unknown adventure, began on Sunday, September 9th, 2018 and ended four days later, on the 13th. Because not of us bought the same flight, the first ones arrived in Marrakesh at 12:25 PM, while others arrived on a second flight at 2:30 pm.
At the airport, Sayd, who was our guide, and his colleagues, were waiting for taking us to the hotel. There, we showered and left our things, before going out to discover the city. And that’s where the first adventures began. 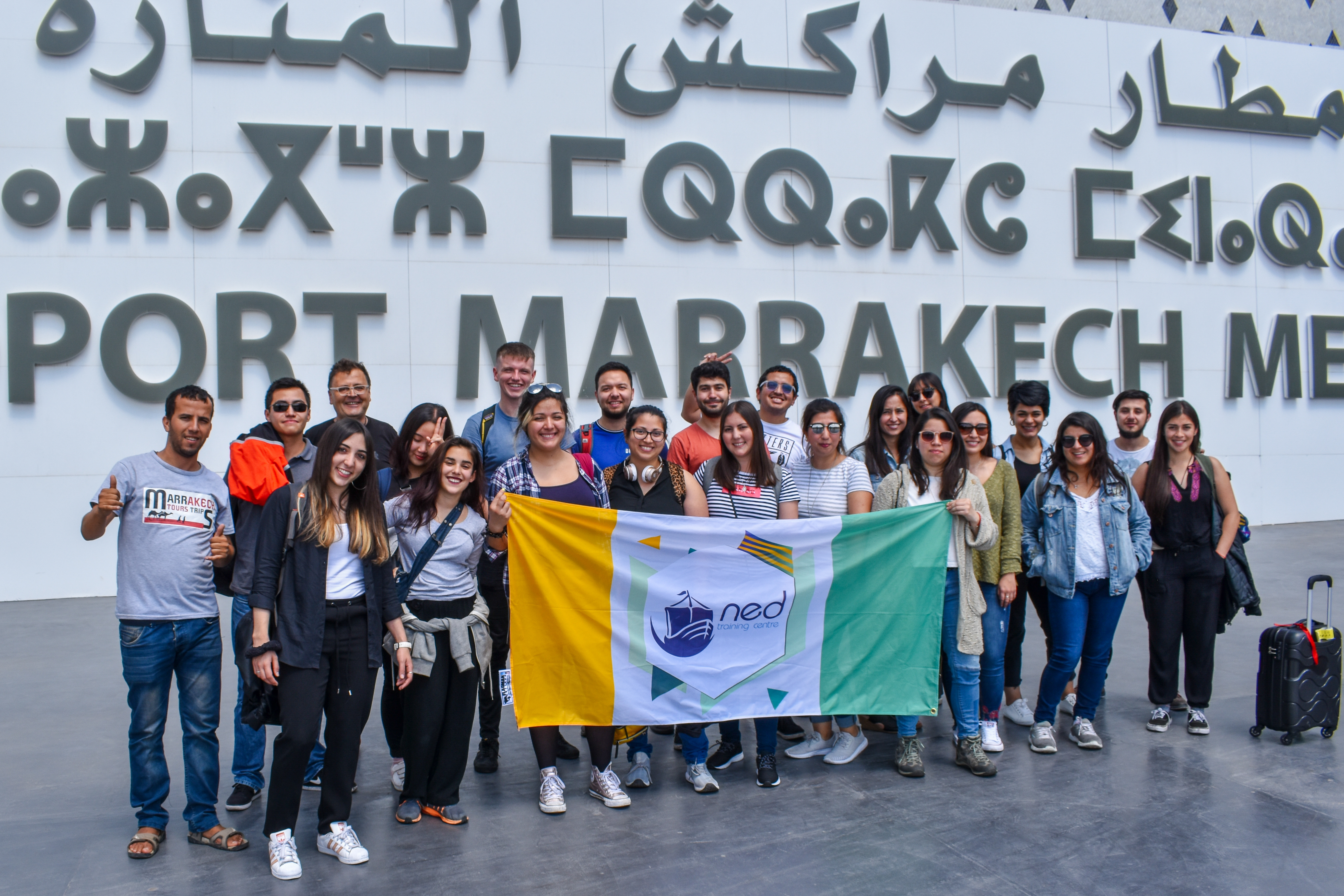 The city centre is very commercial. Even simple things like taking a picture with a monkey involves money and negotiations. Probably the first thing that catches one’s attention is the insistence of the locals to sell their products and the haggle with the tourists. It is like a game, because everyone seems to be having fun, which is very much part of their traditions.

Marrakesh it is not an expensive city for tourists. In general, the accommodation, food, transport, tourist spots, souvenirs, etc., are cheaper than other destinations, so your budget will not suffer, unless you fall into temptation, as there is such a variety of products, mostly consisting of the country’s handicrafts and agriculture. From handicraft works made out of metal, wood, stone, wool, leather, and etc., to the richest fruit juices. Yes, because despite of what many people think, these lands have an infinity of goods and everything can be manufactured and commercialized.

Another eye catching is the city’s architecture. Almost all its buildings are reddish, as clay is the most used material for construction, which in addition to being economical, maintains a freshness in the interiors of houses.
That colour gives a unique style, a stamp on the landscapes of cities and small towns, which sometimes blend perfectly between mountains and desert plains. The amount of abandoned or half-built-buildings also caught our attention, as many people are not able to save enough money to pay for their houses till they are finished so that they end up living in unfished houses

The second day, after a very fulfilling breakfast we went to our next destination: The Atlas Mountains. These mountains presented us wonderful landscapes, fresh air and the possibility of disconnecting from everything; it was incredible.
Having stopped for lunch, we went to Kasbah Ait Ben Haddou, an ancient city which was a fortified village, where there are only four remaining families living. It is a magical place where several famous movies have been set, such as Sodom And Gomorrah (1962), The Jewel of the Nile (1985), The Mummy (2017), Gladiator (2000), and etc. More recent, the TV series Game of Thrones (2011) has been recorded there.

On the way to our hotel in Ouarzazate, we continued to marvel at the landscapes, witnessing a beautiful sunset as we passed by different small towns. When we arrived at the hotel, we are greeted by the hosts with a delicious meal consisted of chicken, couscous and vegetables. Having eaten, we were ready to relax and recover our strength for the next day. 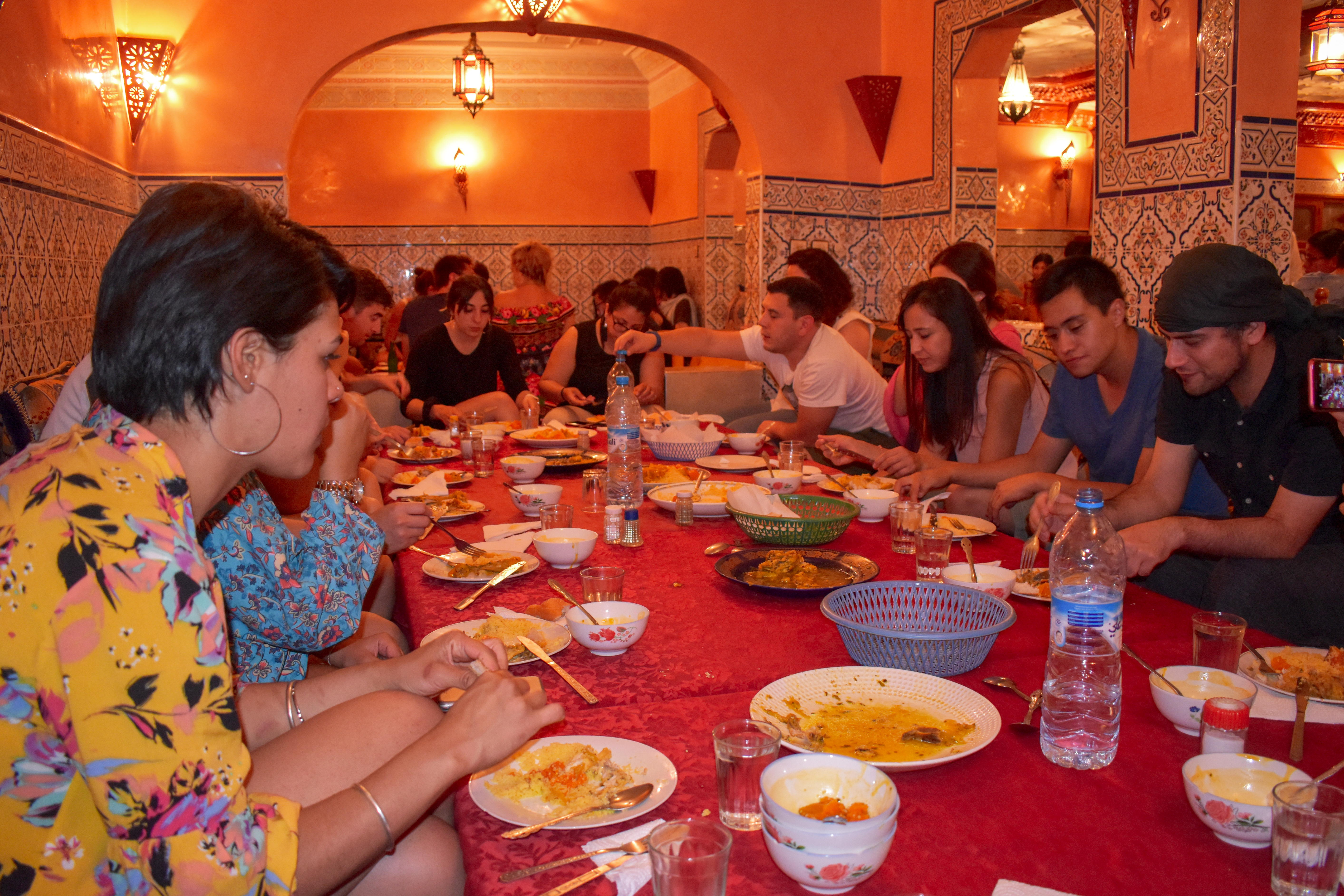 On the third day we continued on our tour through the High Atlas Mountains to see Dades and Todgha Gorges. Those were deep cliff-sided canyons, both carved out by the Todgha and Dades Rivers. We also passed through the Palm Tree Valley, Dades Valley and Valley of Roses, which is pink dressed in the Spring, before reaching the infinite dunes of the Sahara. 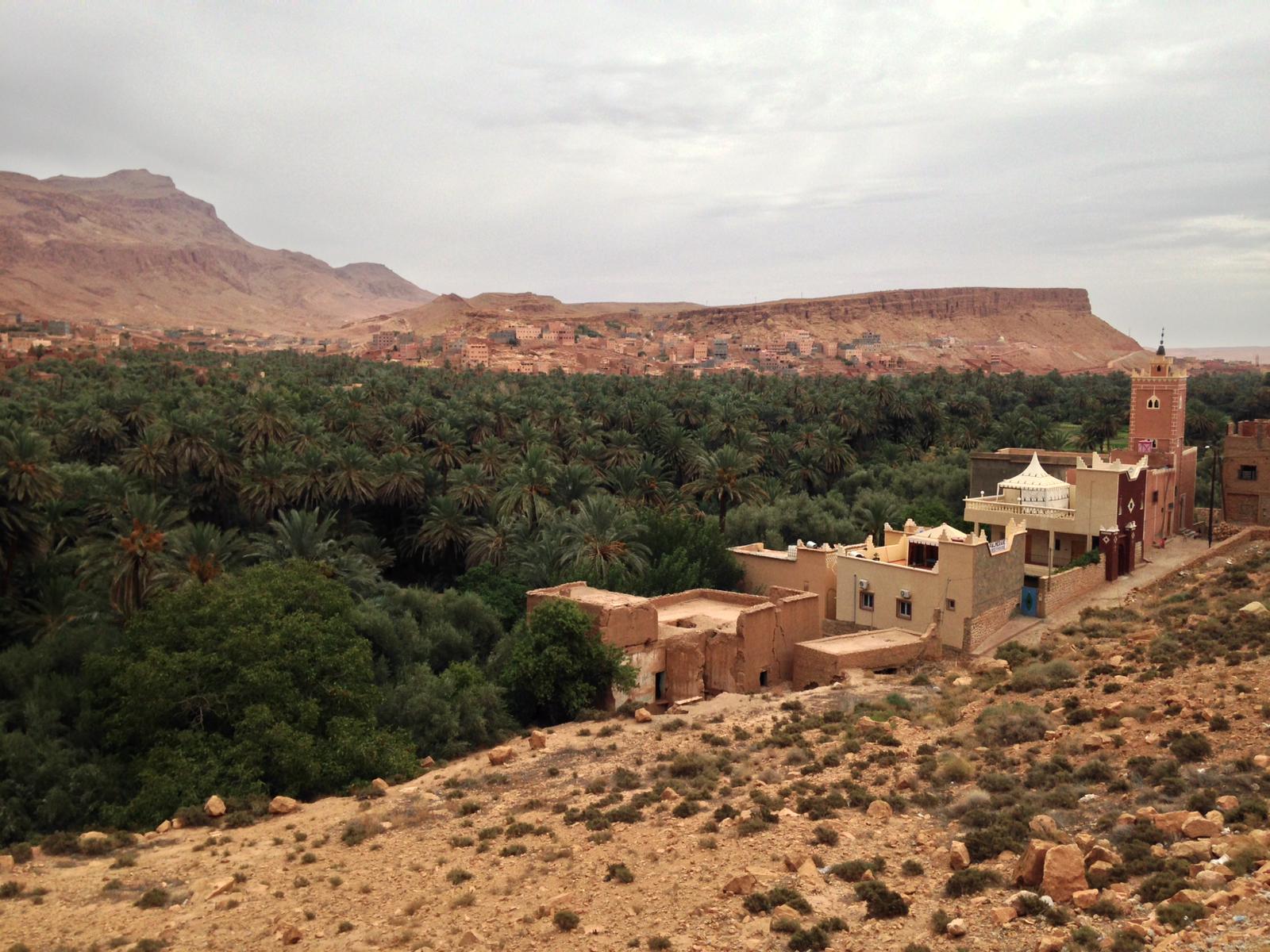 We arrived in the desert after 5 o’clock in the evening. The dromedaries, which are amazing animals, were waiting for us and the journey through the Sahara Desert began. The desert was beautiful in its sands, form, silence, and animals. It was a really magical moment.

After an hour, we finally arrived at where our tents were located. Our tent village was very well-equipped and protected; we even got to have bathrooms and showers at our disposal. At the arrival we were invited to practice sandboarding along the dunes, which almost anyone resisted. 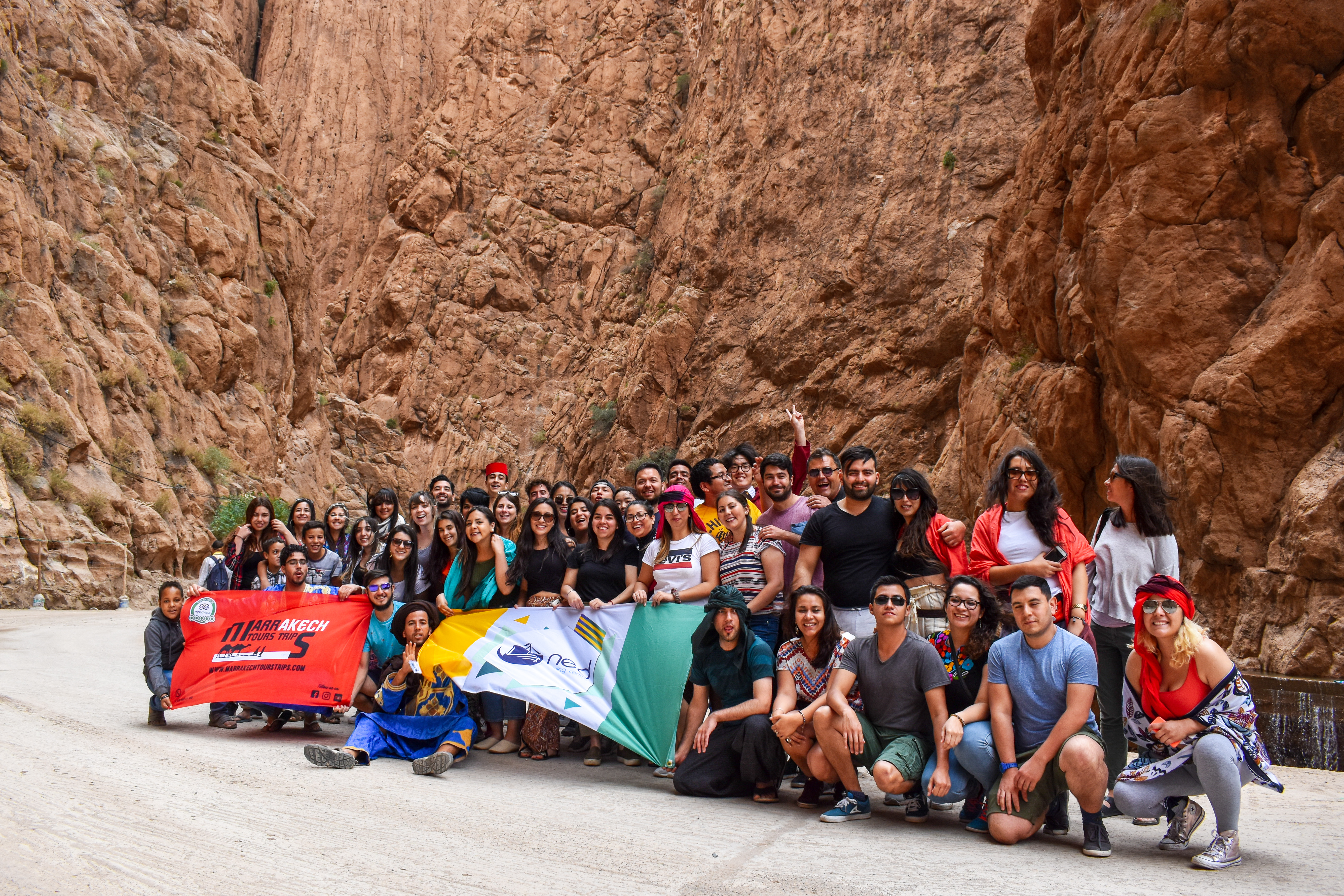 Having showered, we were ready to enjoy a very rich banquet prepared especially for us by our hosts. After that, it was time to relax. We enjoy the performance of local musicians who played African music to which we danced and the bonfire gave the perfect atmosphere to close our penultimate day of adventure. 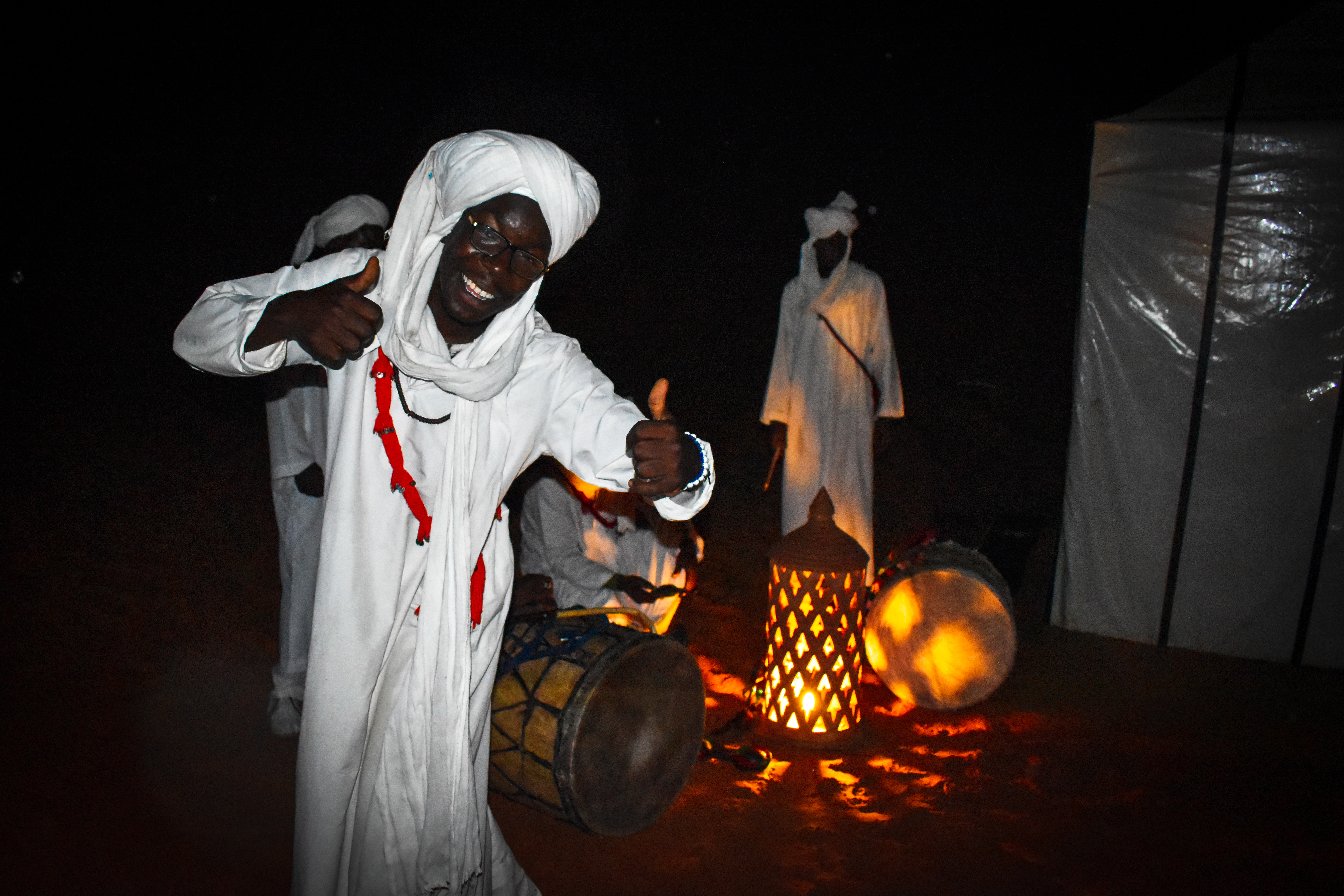 The following day breakfast was very early, though extremely delicious. We had to choose whether to return on the dromedaries or in a 4×4 car, leaving and adding at the same time a beautiful experience as before.
On our way back to Marrakech we visited the Atlas Studios, a famous movie production company and as well as some other sightseeing stops. The return trip to Marrakech was not short, so we had some breaks to stretch our legs, have lunch and use the toilet. 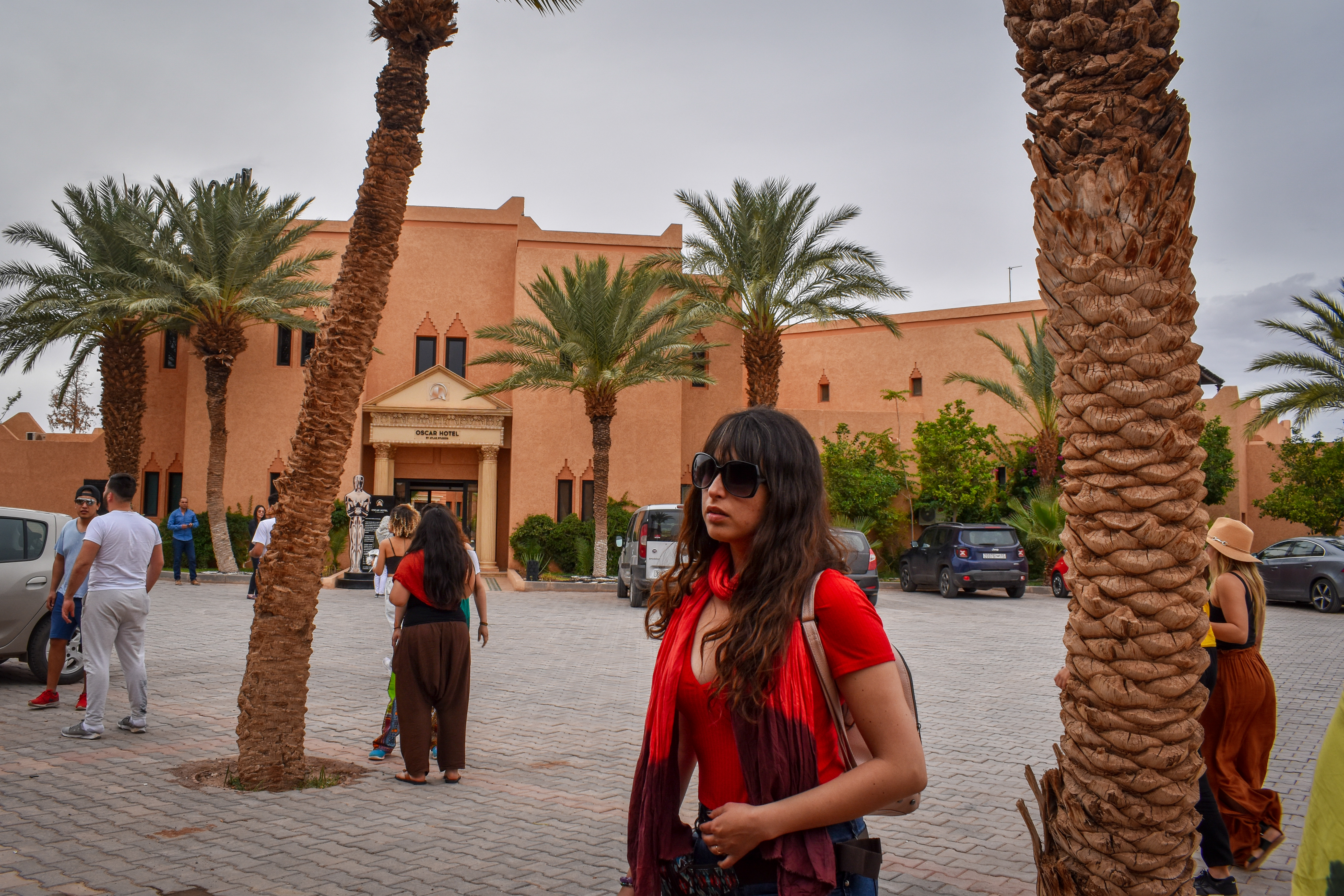 At nightfall, when we were approaching the city we luckily had the chance to witness a thunderstorm from the distance; the sky was astounding. Arriving at the hotel, we had enough time to tour the city centre once more, take a shower and wait for the transfer that would collect us at 3 AM to take us to the airport and put an end to our adventure in those magical lands. 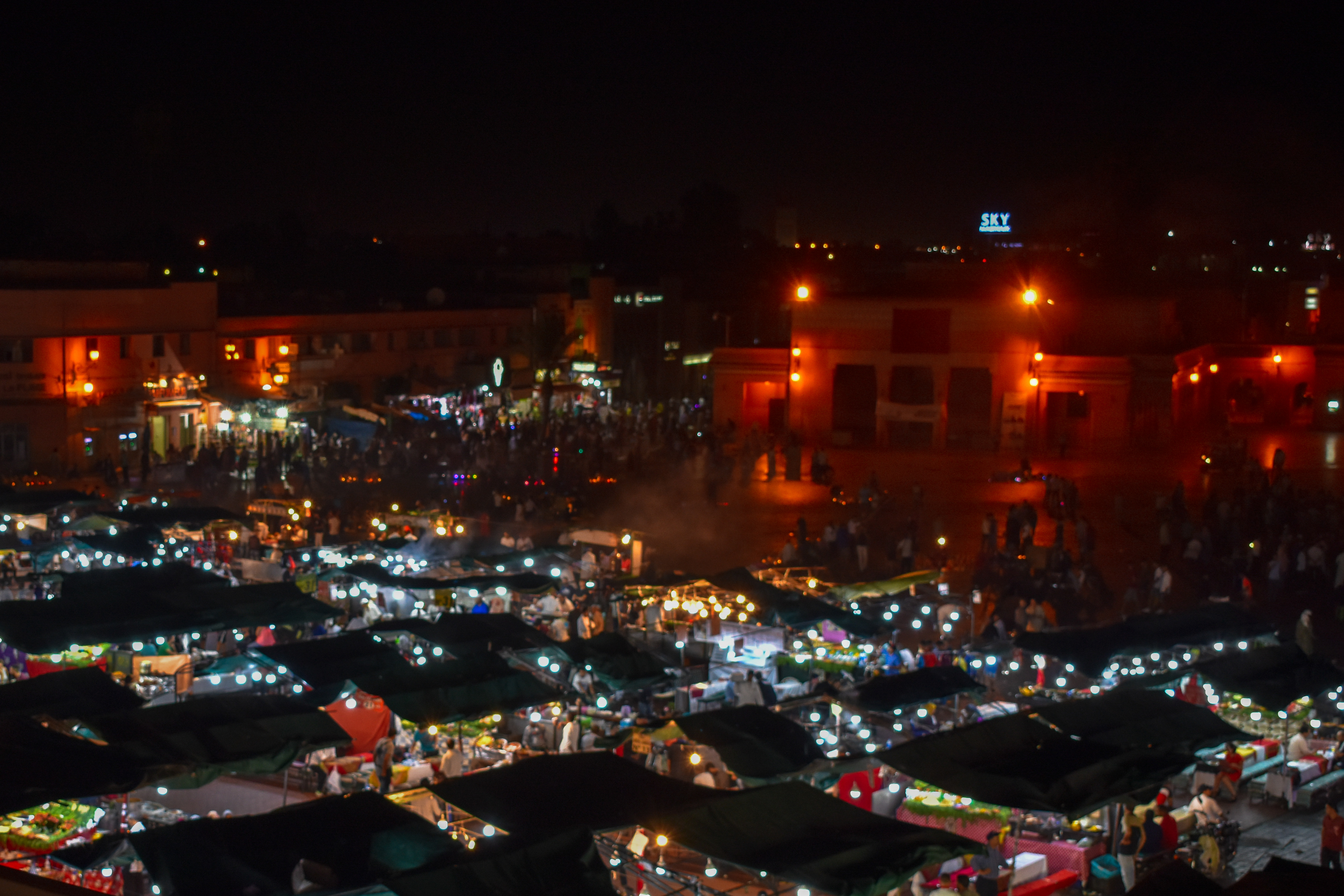 In summary, it was a unique experience, which of course I recommend to anyone who has the courage to take it, because Morocco, not only left us with photographs of unforgettable landscapes and stories to tell, but also showed us a different lifestyle and taught us that there is much more outside, in the real world, than inside a TV or a travel magazine.
It does not go without saying that one thing is what people tell you, another thing is to experience it yourself. So, go and explore, there are a lot of possibilities that you might do know yet and they are waiting for you.

This blog belongs to NED Training Centre. Do you want to study English in Ireland and go further in your career?  Contact us: http://www.ned.ie  ☘ ✈ 🇮🇪 Invest in your Future!