Although Guinness is probably one of the most popular beers in the world, known in every corner, even in the most unexpected places, Irish food hasn’t got the same popularity throughout the world. Every country has its typical or traditional food, more or less admired by all. Italy has pasta, Spain has paella, Mexico has burritos and Brazil has feijáo. So what about Ireland?

There are a few delicious dishes that you need to try but keep in mind that probably the times at which the Irish have lunch and dinner are different from your home country. Here lunch starts around 12:00 pm or 1:00 pm and the quantity of food taken by people is smaller than the food taken at dinner time. It is very common to have the soup of the day together with something else such as a sandwich or wrap. Then, dinner is around 7:00 pm and this is the big meal of the day.

Do you want to know the best about Irish Gastronomy? Let’s go! 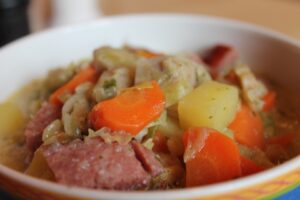 Irish stew is probably the jewel in the crown of Irish cuisine but what makes it so special? It is a variety of stews usually made with meat, vegetables, and potatoes. Is not made in the same way in every place in Ireland but the most common ingredients include lamb or mutton, onions, potatoes, and parsley. One of the favorite variations is Guinness Irish stew, made with a sauce enhanced with Guinness beer. The better places to try this traditional dish are probably the pubs. 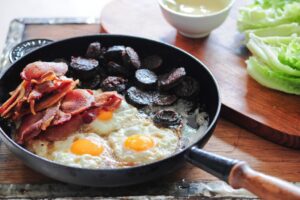 This huge breakfast is not suitable for all palates, but not because it’s not tasty… it’s because is enormous! It was traditionally eaten as a big meal for heavy workdays, and thus has energy enough to sustain you in your duties until dinner time. It is prepared with bacon, sausages, beans, white or black pudding, eggs, potatoes, and vegetables accompanied by soda or brown bread, butter, tea, and a glass of orange juice. 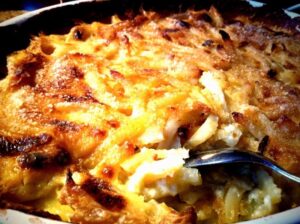 This tasty potato pancake is more associated with areas in the north midlands, north Connacht and southern Ulster. We can find a lot of ways to make it, but the principal ingredient is always potato. We can find it presented as a wrap, similar to a Mexican fajita. Recently, this dish has become more popular and we can find it on the menus of restaurants in many other areas of the country. 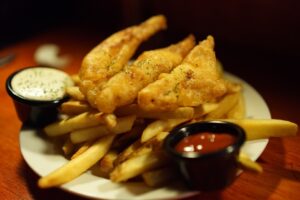 This is not strictly traditional Irish food, but we can find Fish and Chips on the menu of every pub and restaurant everywhere in the country. Its origin is English, and it consists simply of fried fish and chips. In my opinion is not the healthiest option but succulent to have sometimes. 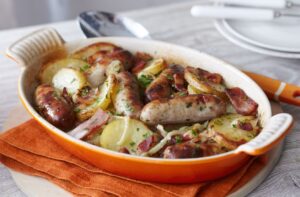 Dublin is the city we associate this Irish dish with. It is prepared in many different ways. However, the most popular recipe is made with layers of pork sausages, potatoes, bacon, onion and parsley or chives. In very recent and modern recipes, we can also find Guinness as an ingredient. Considered a meal to have during the winter months, Coddle was the favourite dish of famous historical figures like Jonathan Swift, and it was referenced in some works of literature, including in the work of James Joyce.